When Nate Flaks and Noah Longworth McGuire tell me they just left the bowling alley before our interview, I can’t help but picture their night out.  It’s an imaginary scene, but neon lights illuminate the bowling alley, the smell of cheap french fries and the scent of squeaky shoes filling the room. A man […] The post LA indie pop-duo Sleeping Lion drops refreshing, cinematic new single “Hurt Nobody” in anticipation of upcoming record Most Improved appeared first on LADYGUNN.

When Nate Flaks and Noah Longworth McGuire tell me they just left the bowling alley before our interview, I can’t help but picture their night out.

It’s an imaginary scene, but neon lights illuminate the bowling alley, the smell of cheap french fries and the scent of squeaky shoes filling the room. A man stands in front of his lane, tapping his foot anxiously; an audience of friends watch his every move. There’s no bumpers on this lane, not like when he was a little kid. He adjusts his stance, swinging his arm back, bowling ball in hand, and then, bringing it forward, he lets go. Woosh. The ball flies down the alley. He’s sure it’s going to be a gutterball, just like his last-round. But he underestimates himself. The ball flies down the alley, and BAM! all ten pins fall to the floor. He jumps up and down. The crowd cheers. It’s a strike!

A bowling alley. It feels like the appropriate place to celebrate an accomplishment – especially the release of the duo’s third single “Hurt Nobody” off their upcoming album Most Improved, out this fall.

An intimate track that harkens back to their humble beginnings, “Hurt Nobody” is both nostalgic and refreshing, as equally an emotionally-vulnerable ballad as it is an upbeat, electro-dance bop.

“Hurt Nobody” was started back in 2017 in our small Boston apartment,” said Nate, one-half of Sleeping Lion. “I had been going through a really rough breakup and came home drunk one night to find Noah going through fake free-to-use movie quote samples. One sample was of a man going “I DON’T WANNA HURT NOBODY” and in my inebriated state, I thought it was hilarious, so we started trying to write a song around it.”

Unfortunately, the duo hit a writing block after finishing the chorus. However, a few years later, during the COVID-19 lockdown, they picked up the song, and with the help of co-writer Alex Vengas, finished the track in less than an hour over FaceTime.

During the writing process, it helped to reflect on a film-noir-inspired music video concept the duo had conceptualized with their friend Noah Sellman over the years. The video encompassed the song’s exploration of post-breakup selfishness, a tension that shines through most vividly on the opening verse.

“I don’t mean to be selfish and worry about myself / Going out with a death wish, I’m getting over someone else”

Beginning with confessional lyrics over minimalist acoustic guitar, Nate and Noah invite you into the world of their romantic lives – capturing the overwhelming fear of hurting people in the process of protecting yourself. As the song progresses, that hushed confession grows into a booming roar during the chorus, complete with a groovy bassline and glittery instrumentation that juxtaposes the song’s thesis.

MAN: I don’t wanna hurt nobody

WOMAN: …But you shot me.

“The story was about a “gritty detective” who keeps getting killed by a classic “femme fatale”, but then wakes up the next day to investigate his own body, unaware its him,” said Nate. “Finally, after a montage of murder, he catches the femme fatale about to stab him and fires his gun! In shock he says ‘I don’t wanna hurt nobody’ to which she coyly replies ‘…but you shot me’. We felt the scene reflected the theme of the song (hurt people hurting people in the gray area that’s neither intentional or accidental).”

Nate and Noah will be continuing this thread of interspersing fake dialogue throughout their Most Improved album, creating a cinematic feel that transforms each single into a scene in a larger film.

In the case of “CTFO,” the single released shortly before “Hurt Nobody”, the duo selected a conversation between an arguing couple (“What are we even fighting about?!” / “What AREN’T we fighting about?!”) inspired by a turbulent moment in one of Noah’s relationships.

“I had reached a point where I just wanted the tension and the fighting to go away and I channeled all my frustration into this song,” said Noah. “I wrote the bulk of it on a bus from  New York to Boston, producing it when I got back to my apartment.”

Similarly to “Hurt Nobody”, Nate said that “CTFO” came about from revisiting old songs that they had been sitting on for years. After rewriting the second verse and punching up the production, he said it ended up one of the proudest releases with the project.

While the songs on the project all vary in sound, Nate added that each track is connected through their songwriting detail, production style, and cinematic influence – with the final outro track “Winedrunk” being an acapella medley of the record that will feature 50-100 individual artists/voices.

“Overall, the record is about what it means to be “Most Improved,” said Nate. “It doesn’t mean starting at the top, it means beginning in a bad place and growing towards something better. It’s about how hard it is to go through transitions, tensions, endings, and artistic cliches only to find yourself missing what you once had and begging for more time to just appreciate mundane things. It’s about laughing, and forgetting, and, ultimately, bowling.”

Bowling. It all comes back to bowling. It feels odd to say, and yet, it makes perfect sense.

In bowling, we learn to go with the flow. To embrace the ebbs and flows of existence – the strikes and the gutter balls, the wins and the losses – and be one with the moment.

No skyrocket success or beautiful debut

No luck from the jump when you first wanted it, asked, and begged for it Most improved means steady growth

Beginning from the bottom, bad but eager to get better

Finding that no path is the right one

And broken shrubs where people left for reasons you can’t understand (but one day might) But if you listen carefully, each path is scored by the din of millions of instruments If you look up from your feet you’ll see the endless communities of tents along the edges of the path, troubadours and traveling circuses, echoing laughter

We shouldn’t have to worry so much so young

We shouldn’t have to care so much so old

We are meant to do nothing but laugh, love, sleep, eat, and drink water

Really, we should be bowling

Gutter balls slowly gravitating closer to the center with every frame

Counting downed pins, one spare, one strike, and eventually, some wins

Improving, together, until we’re most improved

We should see each other more

We should be bowling

24 Recipes That Make the Grains in Your Pantry Exciting

The online incel movement is getting more violent and extreme, report says

How To Reapply Sunscreen Without F-Ing Up Your Makeup

Treat Yourself to This Walnut & Honey Olive Oil Cake With...

Jungalow By The Mountain Pool Renovation

30 Ways to Excel at Self-Care That Aren’t Champagne & Bubble...

Seven days that shook the UK

With the Conservative party locked in a stand-off with the bond market, Liz Truss’s... How to Create an Inviting White Kitchen on a Budget

White kitchens are extremely popular right now and for a good reason. They can make...

Nick Cannon Welcomes Baby No. 10: A Guide to His Ever-Growing...

It's no secret that Nick Cannon is wild about kids. After all, the Wild n' Out star...

The Risks of Tree Removal: Reasons to Call a Professional

You might need to have a tree removed from your property for many reasons. It could... The Dangers of Hiring a Bad Mold Remediation Company

Mold is a serious issue. If you think you have a mold problem, it’s important to...

The OHL had a number of prominent players produce for Canada to win gold at the... 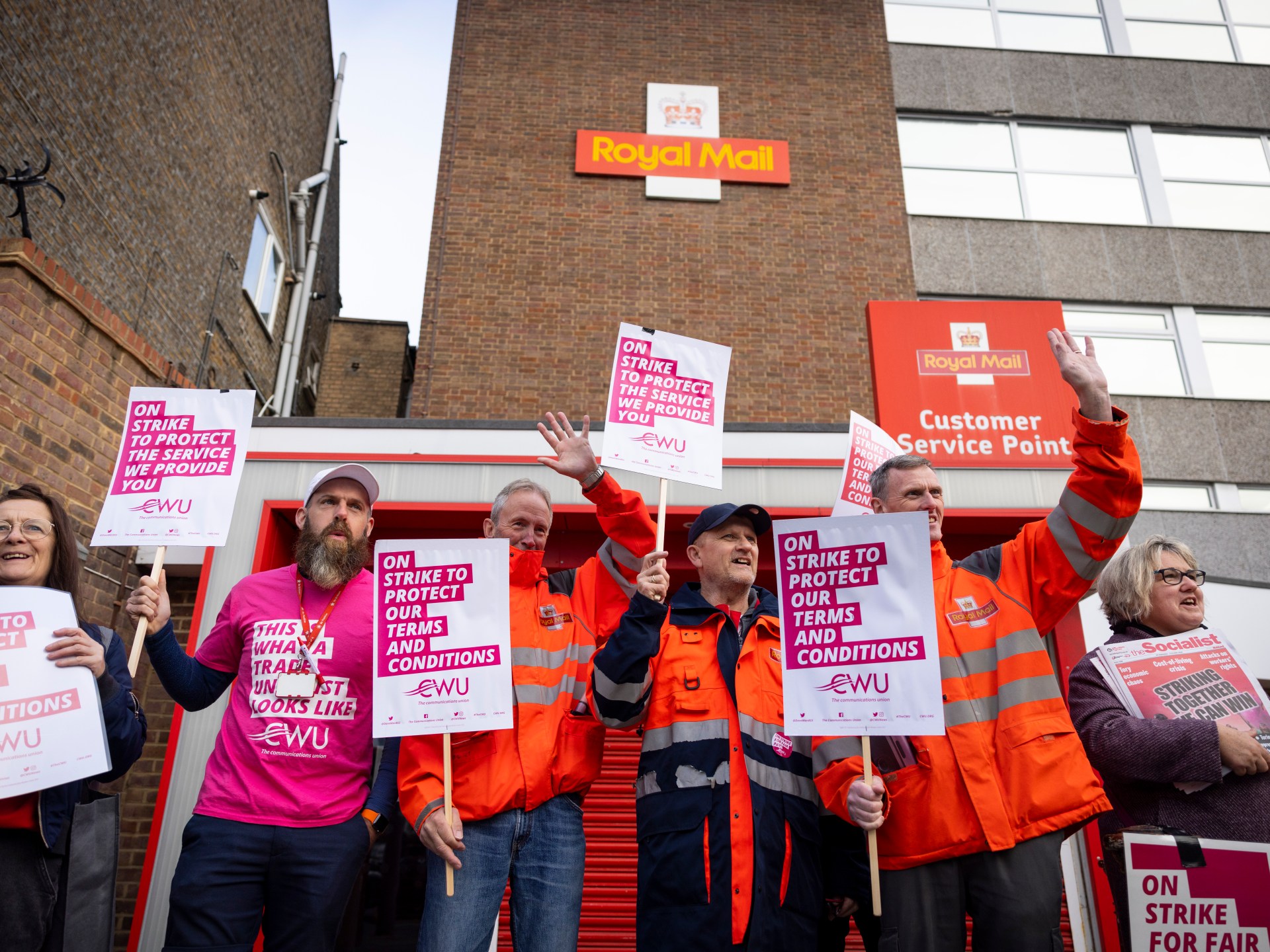 The walkout over a pay dispute comes after failed negotiations, hitting postal deliveries...

​The fall in the domestic unit was triggered by the strengthening of the greenback...